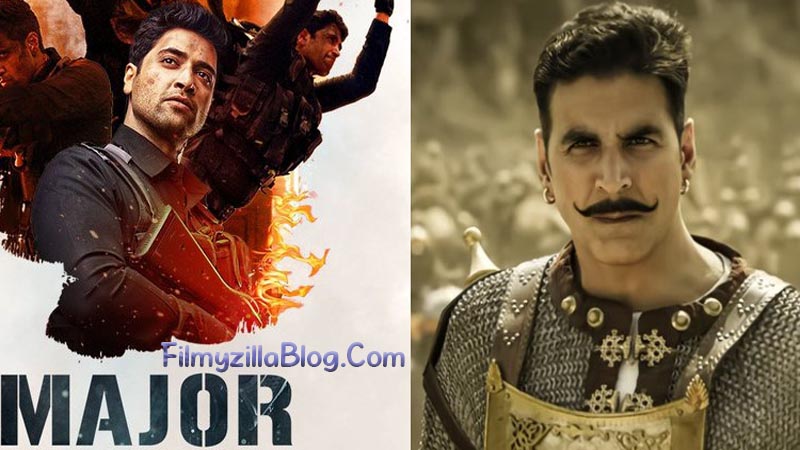 10 Biggest Box Office Clash 2022: Next is Major vs Samrat Prithviraj vs Vikram: The year 2022 has come with the new hope for cinephiles as finally they are now able to enjoy the movies in the cinema halls that were closed due to the country-wide lockdown owing to the COVID-19 pandemic.

Many movies that were supposed to be released in the last two years got delayed due to the pandemic. As the pandemic started losing its grip in India, the filmmakers of long-halted movies quickly booked their release dates and that is the reason we have witnessed clashes between the biggies from the start of this year.

So, in this article we are updating all those movies that have already faced direct clashes or are set to face it or are expected to face it in the upcoming months or this month. There are also some South Indian big banner films, that are going to clash with Hindi films, which may result in affecting the business of Bollywood movies.

There will definitely be a change in the release date of a few movies but we can see the biggest clash of all time as several movies are pending for a long time due to COVID-19.

1- SAMRAT PRITHIVIRAJ VS MAJOR VS VIKRAM

All of these big banner movies will be released on a big scale on June 3, 2022. Chandraprakash Dwivedi directorial Samrat Prithviraj, will star Miss World 2017 Manushi Chhillar opposite Akki, the film’s release date delayed multiple times for multiple reasons before coming to the new release date. The film will also be released in Telugu and Tamil dubbed versions.

Must Read: Clash this Week: Prithviraj vs Vikram vs Major, Who will win biggest Box Office Collection Battle of 2022?

While Major, which is based on Army officer Sandeep Unnikrishnan, who got martyrdom in 2008 Mumbai attacks, will be released in dubbed Malayalam version, along with Hindi and Telugu languages.

Produced by Ronnie Scewvala’s RSVP Movies, Mission Majnu is an upcoming spy thriller film starring Sidharth Malhotra and Rashmika Mandanna, who is making her Hindi film debut with this film.

The film is scheduled to be held theatrically on June 10, 2022 and will face a direct clash with Hollywood biggie Jurassic World Dominion, which is the sixth installment of Jurassic Park franchise and the sequel to Jurassic World: Fallen Kingdom (2018). It is made up of a whopping budget of $ 165 million.

Ayushmann Khurrana and Rakul Preet Singh starrer social drama film Doctor G is set to release on June 17, 2022. The film is directed by Anubhuti Kashyap and produced by Junglee Pictures.

It will face a clash at box-office Dharma Productions’ upcoming comedy drama film Jug Jugg Jeeyo, starring Varun Dhawan, Kiara Advani, Anil Kapoor and Neetu Kapoor in the lead roles. The film’s trailer has already been released and is creating a lot of buzz, it will be released a week after Doctor G on June 24, 2022.

On 11 August 2022, movies of two of the Bollywood superstars Aamir Khan and Akshay Kumar, will face a direct clash at Box-office. Aamir’s much awaited romantic film Laal Singh Chaddha that is already creating a lot of buzz is going to release on that day.

Recently, Aamir launched the trailer of his much-anticipated film during the finale of IPL on May 28, 2022 and received an amazing response from the public. Toted-to-be a romantic film, the film also stars Kareen Kapoor Khan opposite Aamir.

On the other side, Akshay starrer Raksha Bandhan that is directed by popular filmmaker Anand L. Rai also stars Bhumi Pednekar in the female lead. The film is a comedy entertainer.

Mohit Suri directed Ek Villain Returns, which is the sequel to his 2014 romantic action film Ek Villain is all set for its theater release on July 29, 2022. It will star a completely different star cast from its sequel including John Abraham, Arjun Kapoor, Disha Patani, Tara Sutaria and J.D. Chakravarthy in the lead role.

6- ROCKETRY: THE NAMBI EFFECT VS OM: THE BATTLE WITHIN

Versatile actor R. Madhavan’s highly anticipated film Rocketery: The Nambi Effect, based on the life of ISRO scientist Nambi Narayanan, is set to release on July 1, 2022 in original Hindi, Tamil, English versions along with dubbed Telugu, Kannada and Malayalam  versions.

The film will face a direct clash with Aditya Roy Kapur and Sanjana Sanghi starrer action adventure film Om: The Battle Within which is directed by Kapil Varma and jointly produced by Zee Studios, Ahmed Khan and Shaira Kha.

Vikas Bahl’s directorial Ganaptah Part-1 is a sci-fi action thriller that features the hit Jodi Tiger Shroff and Kriti Sanon, they both first acted in 2014 released Heropanti as the main lead, which was their debut film and commercially hit at the box office. The film will hit big screens on December 23, 2022.

It is going to clash with Hollywood’s long-awaited big-budget film Avatar 2 or Avatar: The Way of Water, which is set to release a month before Ganapath on December 16, 2022. It is made up of $ 250 million and is the sequel of 2009’s acclaimed epic sci-fi film Avatar.

UNWANTED BO CLASH IN THE PAST 2022

No-one expected that a small film The Kashmir Files will earned the tag of All Time Blockbuster and huge budget movie Radhe Shyam will see disastrous result.

8- THE KASHMIR FILES VS RADHE SHYAM VS BACHCHAN PAANDEY

Both movies were released on March 11, 2022 and were much-anticipated projects of the Industry. However, we can say that there were more expectations from Prabhas’s Pan India film as it was a biggie made with a whooping budget of Rs. 300-350 crore, but turned-out-to be a big disappointment.

On the other hand, TKF, was based on a true story of exodus and killings of Kashmiri Hindus during the 1990s, was said to be made of a Rs. 10 crore budget turned out to be first biggest success of Bollywood, post COVID-19 pandemic.

Despite lots of controversies the film broke all box-office records and became the major success post pandemic era. It grossed a whopping amount of Rs. 340.16 crore at Box-office. The TKF wave single handedly pushed Prabhas’s biggie out of the Box-office race.

Bachchan Paandey released on the occasion of Holi (18th of March) but The Kashmir Files didn’t give a chance to this mass entertainer.

The clash between Karthik Aryan starrer Bhool Bhulaiyaa 2 and Kangna Ranaut starrer Dhaakad was one of the biggest in Bollywood. There was equal hype of the movies both self-made stars.

However, the horror comedy BB2 won the battle to audience’s hearts and Kangana’s action thriller, despite creating a lot of buzz, turned-to-be a disaster at box-office.

Since the opening day BB2 has been receiving an amazing response and grossed Rs. 14.11 crore the same day while on the other side Dhaakad opened to 50 lakhs and collected around Rs. 2 crore by the first weekend.

Produced by filmmaker Sajid Nadiadwala’s Nadiadwala Grandson, Tiger Shroff starrer Heropanti 2 is the sequel of his 2014 hit romantic film Heropanti. The film was released on April 29 and faced a direct clash with another big budget film Ajay Devgn starrer Runway 34.

Heropanti earned Rs. 6.5 cr on the opening day and have grossed a total of Rs. 35.13 cr against a budget of Rs. 70 crore while Runway 34, which was one of the most-awaited project of Ajay Devgn and was produced by his Ajay Devgn FFilms grossed Rs. 47.65 cr against the budget of  Rs. 65 crore. Both films couldn’t perform well at the box-office and turned-out-to be big disasters.