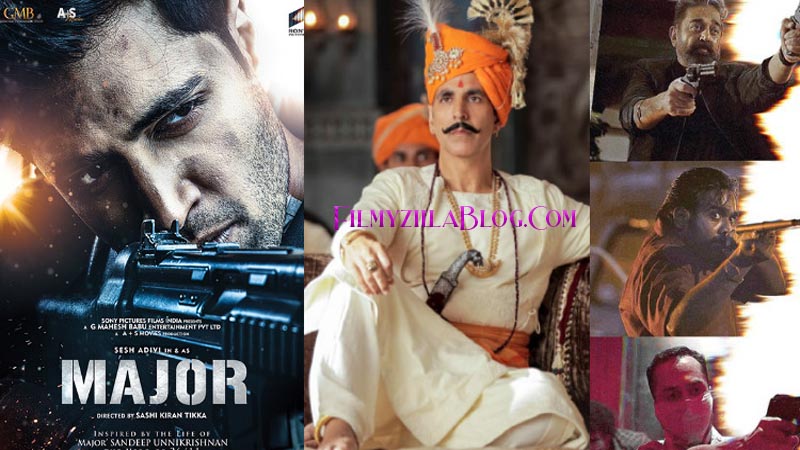 Clash this Week: Prithviraj vs Vikram vs Major, Who will win biggest Box Office Collection Battle of 2022? The year 2022 will witness the biggest Box Office Clash, big-budgeted, star-studded movies from top film industries Bollywood, Tollywood, and Kollywood to face-off on 3rd June 2022.

We’re headed towards the mid of 2022, the year has been bitter for Bollywood filmmakers, some of the most awaited films like Bachchan Paandey, Heropanti, Runway 34, Jersey, and Attack bombed at the Box-Office.

The only good thing happened that low-budgeted movies like ‘The Kashmir Files’ stood out as clear Big Blockbuster of all time. However, star power fever didn’t work and South Indian Cinema won all over.

First Pushpa: The Rise, then RRR emerged as a blockbuster, and now the monster KGF Chapter 2 is not in a mood to slow down, now the question arises that who will win the biggest Box Office Clash of 2022, Big Telugu movie Major, Big Tamil Movie Vikram and Big Bollywood Movie Samrat Prithviraj are releasing on the same day.

Recently we have seen how the clash between Bhool Bhulaiyaa 2 and Dhaakad, damaged the latter at the box office, all the major shows were acquired by the Kartik Aaryan starrer while Kangana’s film had to face the brunt, before same happened with Bachchan Paandey vs The Kashmir Files.

Now, the biggest clash at the box office India in the year 2022, will see who eventually going to win among the three films above mentioned, the clash is also important as all the three films are originally from the different parts of Indian cinemas like Prithviraj (Hindi Cinema), Vikram (Tamil Cinema) and Major (Telugu Cinema) and will be released in different Indian languages dubbed versions.

Here we are discussing the films one by one in brief below:

After a long, Bollywood will see an event film with a high scale budget of Rs 300 crore. Chandraprakash Dwivedi’s directorial film is highly anticipated, the trailer of the film has shown that it could attract the footfalls in mass numbers towards the cinemas.

Must Read: Clash this Week: Prithviraj vs Vikram vs Major, Who will win biggest Box Office Collection Battle of 2022?

It will be released in 4000 theatres in the domestic market only. It enjoys an ensemble cast Akshay Kumar, Sanjay Dutt, Sonu Sood, debutante Manushi Chillar and the veteran Ashutosh Rana.

Tamil film Vikram is already much anticipated in the down south as the three powerhouses of the cinema will be seen together sharing the screen, namely Kamal Haasan, Fahadh Faasil, and Vijay Sethupathi. All eyes will be on this film, as of now there is not much hype for the film in the northern belt but it could emerge as successful as Pushpa if word of mouth spreads like wildfire.

Directed by Lokesh Kanagaraj who hadn’t seen any failure since his arrival in the industry, music maestro Anirudh Ravichander was onboarded for the music department.

The trailer of Major is spreading like wildfire in both languages Hindi, and Telugu, especially the dialogues like “Jaan Dunga Par Desh Nahi” (I’ll give my life but not the country), which has the power to engross the audience on the screens. Bankrolled by the superstar Mahesh Babu.

There is a high chance of the film becoming successful like The Kashmir Files, the small film which went on to become an all-time blockbuster. On the commercial level, Telugu film earns big in the home market, especially on the first day, and if the film acquires a good number of screens up north, the film could do wonders.

So, here we have put all the information that was buzzing around these films, we hope that all the three films will emerge as successful as all these films are in some way worth watching, and also the commercial success of these films will eventually benefit the box office India.

Now you tell in the comment box who would you like to emerge as a winner among the clash of these three magnum opuses? And stay tuned to FilmyzillaBlog for the box office-related news and interesting upcoming movies/series around the world including India.