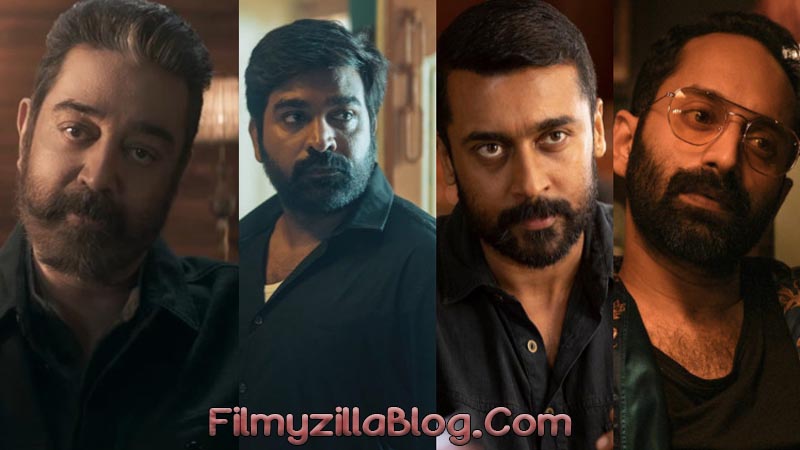 The latest Kollywood outing is directed and written by the successful director of Tamil cinema Lokesh Kanagaraj, and will be released on June 3rd, 2022.

The film has made much hype since it was announced as the film features the powerhouses of the south Indian cinema Fahadh Faasil, Vijay Sethupathi, and Haasan himself.

Advance bookings for Kamal starrer have opened six days ahead of the film’s release on May 28, Saturday, in two languages Tamil and Telugu. While the Hindi version bookings haven’t been opened yet.

As per the reports, Vikram’s Tamil version has collected Rs 3.40 crores for day 1 till Monday evening, with most from the Chennai city Rs 1.25 Cr.

Haasan is back on the big screens after an over 3 yr long gap and it seems he came at the very right time, scroll down and read on to know the reason.

As we know, post-pandemic things have changed, Indian viewers who would wait for the forthcoming Hindi films now started to make room for the regional industries also.

Recently Pollywood film Saukan Saunkane had an opening of Rs 2.25 Cr nett and the Marathi film Dharmaveer enjoyed a wonderful opening weekend of Rs 9.08 Cr. Which is on the lines of Bollywood biggies Runway 34, Heropanti 2, Jersey, and Jayeshbhai Jordaar BO collections.

The above facts show how much there was a gap for the lack of content in the Hindi film industry which is now being filled by the other regional cinema films. The success of the regional films like Honsal Rakh, Shivaji, etc in the different territories is the proof.

South Industry has emerged as a major player in this, they have won the hearts of pan India cinephiles, box office collections of Pushpa, RRR, and KGF2 are examples of this.

And now it is the right time for Haasan’s upcoming flick as it shows full potential to emerge as a pan India blockbuster.

The other reason is the film enjoys three powerhouses of south Indian cinema, along with the superstar Kamal Haasan, the national awardee Malayalam film actor Fahadh Faasil, who has shown his potential in blockbuster Pushpa, and the Makal Selvan aka Vijay Sethupathi, reportedly the actor will be seen in the never done before role and is all set to charm the audience with his acting skills.

As per the latest reports, Kollywood star actor Suriya will be doing a cameo role in the film.

The trailer of the film is being well received by the movie lovers, as per the trailer the dialogue, dark theme, and the actors will be key factors in the film’s success. The trailer promises to be a full-fledged action entertainer, it will be a fight between three seasoned actors, Fahadh Faasil (a cop), Sethupathi (a drug lord), and the Haasan ( the ghost).

As we discussed above that the superstar is back on the silver screens after over a 3 year-long hiatus. Though his last film (Vishwaroopam 2) was considered a box office bomb, the actor seems to choose the script wisely this time. The actor joins hands with the successful Tamil director Lokesh Kangaraj, the latter has a wonderful career with all three hit movies that he has directed.

His last film Master (2021) went on to become one of the highest grosser Tamil films of all time.

We know that music is a crucial part of Indian cinema, and if a film’s music hit then it is considered to be a half job is done. The talented Anirudh Ravichander has given the music in Vikram and going by the recent track record of the music composer, whether in the Master, Doctor, KRK, and recently DON, his music is said to be influential in order to attract the cinephiles in the cinema halls.